The Swagger V1 Pro is one of the world’s lightest electric scooters, manufactured by Swagtron in the United States. Swagtron was founded in 2015 and swiftly rose to prominence in the field of electric mobility gadgets. However, the company’s market debut was hampered in 2016 when it was forced to recall its Swagway X1 hoverboards owing to a fire danger caused by overheated battery packs. Since then, the firm has rebounded with a slew of successful products. The Swagtron Swagger V1 Pro, one of their most popular budget electric scooters, is the subject of today’s review.

The Swagtron Swagger V1 Pro is a mobility gadget for distances that are too far to walk but too short to drive. The Swagger satisfies the majority of requirements for the ideal scooter.

The pricing is one of the most amazing features of the Swagger V1 Pro. For just $240, you will never find a better deal in your lifetime! The V1 Pro shares a carbon-fiber frame with some of the most expensive supercars in the world. This makes it the world’s lightest electric scooter at only 16.5 pounds. However, don’t let this mislead you; the lightweight frame can carry up to 250 pounds. Its lightweight construction makes it simple to carry by hand.

The Swagger is powered by a 28V 38aH lithium-ion battery and a 250W motor. The engine propels the scooter to a maximum speed of 15 mph, while the battery provides a range of up to 15 miles per charge.

The Swagger has a five-speed transmission, as opposed to the standard two-speed transmission found on most scooters. First gear has a maximum speed of 5 mph, second gear of 7.5 mph, third gear of 10 mph, fourth gear of 12.5 mph, and fifth gear of 15 mph. The gear settings make this scooter ideal for novices. In addition, the option to downshift or upshift provides riders with more control in traffic.

On smooth terrain, the Swagger V1 provides a really pleasurable ride. However, the 8.5-inch tyres perform poorly on rough terrain. Each contact with the ground is carried to the rider’s body through the tiny tyres, the deck, the frame, and ultimately the rider’s body. In addition, the non-pneumatic rear tyres generate a great deal of vibrations, thus diminishing the quality of the ride. However, its design is not all doom and gloom; the Swagger is one of the most attractive electric scooters on the market, although this is disputed. The deck is elegant and large for enhanced comfort and control.

The Swagger has safety measures as standard equipment. It has two brake systems (manual and electric). In addition, a vertically mounted LED lamp provides lighting and nighttime visibility. Although not technically a safety feature, it is important to note that the Swagger has a lighted LED display for information like as speed, battery level, odometer, and journey time. 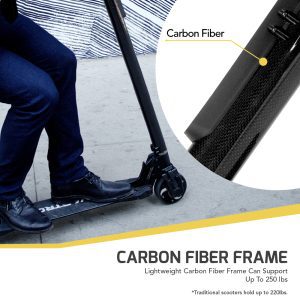 The Swagtron Swagger V1 Pro performs well when compared against its intended function and pricing point. However, when compared to other scooters in its category, it falls short, mostly because of its poor battery.

Regardless of comparisons, the Swagger does its intended function wonderfully! The 250W engine generates barely enough power to propel the scooter to a peak speed of 15 miles per hour. To attain and sustain this speed, however, the e-scooter must be used on flat, smooth surfaces. Its failure to reach peak speed with relative ease is indicative of a further flaw: a poor engine. This loss of force is especially noticeable while climbing.

As noted before, the Swagger has a range of 15 miles per charge. However, this depends on the terrain and driving speed as well. If your regular commute involves vast miles, you should invest in a more powerful vehicle. The Swagger is developed specifically for shorter trips.

The maximum speed of the Swagger is 15 mph, which is not sluggish! It is essential to understand why we need electric scooters in the first place: to cover distances that are too long to walk but too short to drive. In context, 15 miles per hour is five times quicker than the typical person walks!

As said, the Swagger has five gears that allow it to achieve 15 mph. These gears provide regulated acceleration, therefore enhancing your control.

Unfortunately, the Swagger performs poorly on slopes. Even on slopes with gradients as low as 2%, the e-scooter demonstrates a substantial loss of power. The tension is exacerbated by the addition of more weight. If you are a hefty individual living in a hilly area, this scooter is not for you.

However, this performance is typical for scooters in this price range.

In ideal circumstances, the 28V 3.8aH battery can power the scooter for up to 15 kilometers on a single charge. The V1 Pro features an outstanding 90-minute charge time. Comparatively, the typical scooter takes four hours to completely charge.

The lifespan of lithium-ion batteries is controlled by their charging frequency. Smaller batteries, such as the one used in the Swagtron Swagger V1 Pro, deplete fast, demanding regular recharging. As a result, the battery is anticipated to last 500-1000 charge cycles, or around 1-2 years of use.

However, there have been multiple reports of diminished range after a few charges.

The Swagger’s motor has a constant output of 150W, varying between 50W and 250W depending on demand. This engine is linked to the front wheel hub, resulting in a silent ride. The motor can propel the scooter to a maximum speed of 15 mph under optimum circumstances. It is also capable of transporting passengers weighing up to 250 pounds.

The carbon-fiber frame of the Swagger is one of its most notable characteristics. It is lightweight yet robust enough to hold weights up to 500 pounds. It includes a folding mechanism that allows for a smooth transition from riding to carry. The removable handles facilitate storage and transit.

The accelerating and braking controls are constructed of plastic, giving the scooter a low-quality appearance. Similarly, the LCD panel seems cheap and lacks the visual appeal of higher-end electric scooters.

The V1 Pro features one front suspension spring. However, the suspension is overshadowed by the scooter’s choppy ride on uneven ground owing to its small wheels. Again, this is a budget-friendly scooter. It’s fantastic that Swagtron has attempted to pack as much value as possible into it, but when it comes to little budget scooters, small wheels and cheap suspension equal a rough ride.

The suspension does not provide much cushioning, since it is rather inflexible and solely located in the front.

The Swagger V1’s speedometer and battery indicator are nifty. 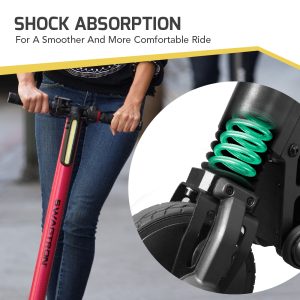 The Swagger excels on flat terrain. Its lightweight body, appropriately proportioned, sandpaper-textured, multilayer deck, and five-speed gearing enable for a controlled and smooth riding on flat areas. Over the other side, the ride quality on uneven ground is impaired, particularly owing to the vehicle’s relatively small wheels. We found the ride quality to be bad on tarmac surfaces that were not smooth, and we found path riding to be a touch uncomfortable in certain spots, particularly in London, where uneven pavement slabs made for an unpleasant ride.

The Swagger is fitted with two brakes (manual and electric). Even over short distances, the overall braking power of the scooter is satisfactory. The manual brake on the Swagger Pro V1 really works rather well, however we could not see a significant difference between it and the electric brake, perhaps because to the low wattage of the motor. You may anticipate a swift stop from 15 mph, but you should still allow for 15-20 meters.

If there were an award for Scooter Portability, the Swagger would win every year. It has a very practical folding mechanism. In addition, it is lightweight and has removable handlebars, making it simple to travel by hand and store in a vehicle.

Vertically mounted on the carbon-fiber frame of the Swagger is a single, brilliant LED headlamp. It is bright and will help you navigate at night, but it may be improved. For nighttime riding, we suggest putting your own flashlight or light to the handlebars.

We do not encourage riding at night because if you hit a pothole or an elevated surface and fall off, you are likely to get an injury.

The Swagger is equipped with a pair of 8.5-inch tyres. The front wheel is pneumatic while the rear wheel is solid. This is intended to decrease the expenses associated with tyre punctures. The size of the tyres, as indicated by the bad assessments of the Swagger’s ride over uneven terrain, does a significant injustice to the Swagger’s overall rating.

The deck contains a sandpaper-textured layer for enhanced traction. Additionally, it provides adequate foot room for comfort and optimal control, especially on terrain with modest irregularities. The deck is proportional to the rest of the scooter and is large enough for comfortable back-to-back footing. Don’t expect to stand with your feet together, the deck is very narrow.

The V1 Pro has a backlit LCD mounted on the right side of the handlebar that looks cheap. The control panel consists of three buttons (a power button and two arrow buttons for gear shifts). Speed, odometer, battery level condition, and gear position are among the basic information presented on the LED display. 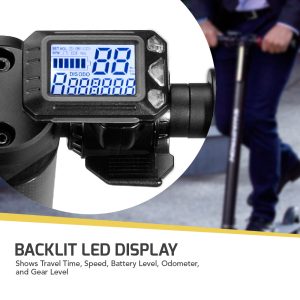 The Swagtron Swagger electric scooter does not have an official grade for water resistance. This can only suggest that the product’s water resistance is unremarkable. Given the quality of construction, it is reasonable to believe that the scooter will continue to function in fairly moist situations, such as light rain. Since the product guarantee does not cover water-related issues, it is advisable to avoid wet conditions.

The Swagger is anticipated to give service for up to two years (or around 1000 charge cycles). It comes with a one-year limited warranty on the hardware. This implies that your product is protected against material and workmanship defects caused by regular usage. Swagtron offers service facilities for all of its products, either independently or via authorized third parties.

There is little information available about the controls of the Swagtron Swagger Pro.

Maintenance of the Swagger focuses on cleaning and storing. Here are some guidelines:

We must deduct points for the batteries of the Swagger. After a few charge cycles, a few of customers have reported a decrease in battery performance. A common issue was that the scooter’s range drops to 9-10 miles after many recharges.

Is this E-Scooter value for money and is it worth buying?

Yes, indeed! The term “cheap” may have appeared a few times in this review, but the Swagger is a reliable product overall. Yes, it has cheap-feeling plastic and a tiny battery capacity, but for $240, you won’t find a better deal!

The speed and range dispute is subjective. Remember that electric scooters are intended for short journeys. The typical cyclist travels around 15 miles per day, therefore any pace between 15 and 18 mph is adequate.

The Swagtron Swagger V1 Pro is, in a word, the ideal scooter for novices. It is both inexpensive and simple to learn.

Manage Cookie Consent
To provide the best experiences, we use technologies like cookies to store and/or access device information. Consenting to these technologies will allow us to process data such as browsing behavior or unique IDs on this site. Not consenting or withdrawing consent, may adversely affect certain features and functions.
Manage options Manage services Manage vendors Read more about these purposes
View preferences
{title} {title} {title}