The Razor e prime electric scooter is a superb adult commuter scooter. This contemporary scooter enters the scooter frenzy as one of the most affordable yet practical e scooters available on the market, with a strong build quality that emanates calm confidence. A brushless 250 watt motor with excellent torque gives enough power to zip around town at a cool 15 mph (24 km/h), so you can be confident it will get you where you need to be on time. This scooter was designed specifically for city commuting, so if you’re a city slicker, this is the scooter for you. This scooter is foldable, lightweight, and easy to transport.

As a long-standing product, the Razor E Prime has shown to be an excellent option for the target demographic of teens, larger youngsters, and potentially adults of smaller frame. The scooter’s low price belies its high quality, as seen by its portability, responsive handling, and, most surprisingly, sturdy construction. 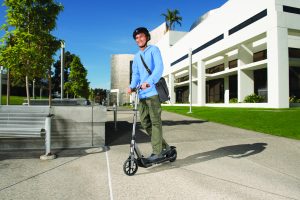 The Razor E Prime has excellent quality, respectable performance, fantastic cost-effectiveness, and plenty of enjoyable features, so it’s no surprise that it’s our Editors’ Choice for Best Scooter. The scooter has a weight restriction of 176 lbs / 80 kg and is designed for teens 14 and older, or maybe younger children who are on the larger side. However, some adults have purchased it anyhow. The Razor E Prime is undoubtedly the greatest scooter on the market if you’re looking to acquire one of these.

That his Razor scooter has a lithium-ion battery is great news, since these batteries are not only more powerful but also simpler to charge and maintain, taking a lot less time to fully recharge.

Charge time for the 36-volt battery of the Razor E Prime is around 3 to 4 hours.

The deck-mounted battery helps improve the scooter’s stability by reducing its height and center of gravity (scooters with batteries in the stem tend to be front-heavy).
On the left side of the deck’s back, behind a black rubber cover, is the charging port for the battery.

The Razor E Prime may be ridden continuously for up to 40 minutes, or a distance of 16 kilometers (10 miles). Several separate owner evaluations corroborated this scope.

The scooter’s 250-Watt, brush less DC hub motor is permanently mounted in the back wheel. While Razor hasn’t announced an official climb angle, most owners report that the scooter’s climbing skills are very acceptable, albeit it will struggle on steeper slopes due to its rear-drive design.

The scooter’s construction is excellent, and its quality belies its low cost. Scooter owners have reported that their children have outgrown their scooters before any of the key components have broken down. The principal construction material is aluminium, which gives the scooter its low weight while also making it rather sturdy and durable. The deck is covered with a sandpaper-like gripping tape to keep you from sliding about, while the handlebars have a sleek, modern look and are protected by rubber grips. The scooter’s folding point is the section of the frame between the stem and the deck, and this section is very sturdy, which is fantastic since it serves as the scooter’s “center of gravity” and provides the device with a great deal of stability.

The tyres are its biggest flaw when it comes to a comfortable ride. Because of how sturdy they are, they can only deliver smooth rides. Not only does the scooter lack basic suspension, but it also lacks any kind of supplementary suspension, which would have been a significant improvement.

At about 21.5 pounds / 9.8 kg, this scooter is among the lightest electric scooters designed for adults.

These are the dimensions of the scooter:

Size (L x W x H): 40.2-by-102-by-46.2-by-9.8-cm-by-40.2-by-9.8
40.6 inches (103 cm) tall
When folded, the scooter’s height is just around 18 inches (46 centimeters), making it very portable. This scooter can be folded down to an extremely compact size, making it ideal for transport on public transportation due to its ability to fit through even the tiniest of vehicle trunks and subway and bus entrances.

It’s safe to say that the Razor E Prime is one of the most easily transportable electric scooters on the market. 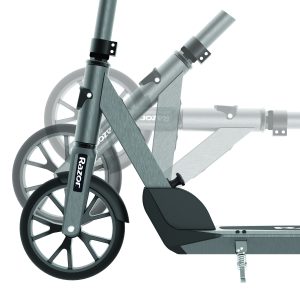 The scooter hardly makes a sound or gives off any vibrations because of the high quality of its construction. The robust brakes and easy acceleration make the scooter a great choice for anyone looking for a fun and safe mode of transportation. While driving, the engine is hardly audible.

The Razor E Prime does not have any lights or shiny decals or surfaces. Because of this, you shouldn’t ride it at night, and in many countries you really wouldn’t be allowed to. While I understand that, given the scooter’s price point, it would be unreasonable to anticipate any frills, I do think that the inclusion of lights, even inexpensive ones, would have been appreciated by many and would have at least made the scooter legal for use on public streets after dark.
You’ll need some aftermarket lights to personalize this bike so you can use it after dark. The guide to electric scooter accessories has some great options, and you can get them at a reasonable price.

Razor EPrime’s dual-brake system consists of an electronic brake operated through the thumb paddle on the left handlebar, which reduces power to the engine, and a foot brake actuated by stepping on the rear mudguard. When used simultaneously, the brakes provide a significant stopping strength and a short stopping distance, even when braking from high speeds (you do have to step harder on the rear foot brake for that though).

There is little risk of the scooter toppling over since both brakes are directed to the back wheel.

The front airless tyre of the Razor E Prime is urethane and is resistant to abrasion, while the rear airless tyre is solid (although they can still wear out significantly over time). It’s inevitable that the ride quality would suffer with this sort of tyre; many current and former owners have complained that the tyres are too harsh for anything but the smoothest pavement.

The wheels on this scooter are 8 inches in diameter; although this is just about half an inch smaller than the norm for most cheap commuter scooters, it makes a noticeable difference due to the tyres’ sturdy construction and lackluster ride quality.

The Razor E Prime’s tyres aren’t its greatest suit. They’re OK to go on smooth pavement and paved roads, but they can’t handle the rough stuff or poorly maintained roadways. 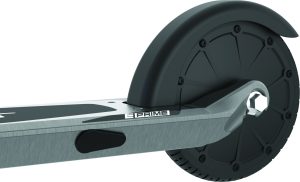 The Razor E Prime has a recommended maximum rider weight of 176 lb (80 kg), making that weight restriction suited for riders aged 14 and above. The board’s dimensions of 16.75 inches (42.5 centimeters) in length and 5.5 inches (14.5 centimeters) in width should be enough for anyone except those with unusually large feet.

The dashboard of the scooter is unusually placed at the base of the handlebar. The scooter can be turned on with a quick touch of the single power button, making it very user-friendly. In order to turn it off, you must press the power button for a longer period of time.

The scooter’s battery life is shown as a spectrum across the dashboard’s five colored bars.

There is no official ingress protection (IP) rating for the scooter, and Razor makes no claims regarding its performance in damp conditions.

Despite the fact that a few scooter owners have reported riding in the rain, there have been nearly no complaints of water-related issues with the scooter.

Because the scooter lacks an IP classification and is equipped with solid tyres, which have much less grip and will skid more on wet ground, it is still preferable to avoid riding in the rain whenever possible.

Amazon is your best bet for purchasing a Razor E Prime in the US and probably elsewhere as well. You get everything you’d expect from an Amazon purchase:

Scooter prices are lower—and shipment times are shorter and more reliable—on Ride And Glide for customers in the UK and around Europe.

There’s a 90-day warranty on all Razor scooters and a 30-day return policy.

The Razor E Prime’s battery is its biggest weakness. The official range isn’t great to begin with, and users have a lot of issues with the battery wearing out or not functioning at all, which causes the range to drop to nearly nothing very rapidly. To be fair, it seems that this was mostly a problem with a 2019 edition, and that Razor has since fixed most of these issues.

Though not necessarily a problem, I do think the tyres provide a significant compromise. They won’t ever need to be replaced, but you can forget about using this scooter on anything except a perfectly level road or similarly forgiving surface.
Those are the most crucial considerations to make before purchasing this scooter.

For youthful riders, Razor is up there with the finest of the scooter manufacturers, and the company’s replacement parts are just as reasonably priced as the scooters themselves. You should be able to locate whatever you need on the official Razor shop or on Amazon. If your scooter is still under warranty, you may usually acquire replacement components at no cost.

In addition, you can easily locate assistance if you ever need it since Razor maintains a large number of service and repair locations in a broad variety of places throughout the globe.

The robust tyres that come standard on the scooter are almost maintenance-free, so you just need to give them a quick cleaning and checkup once every week or two.

Who should buy the Razor E Prime?

To be sure, that’s not the case. The scooter is aimed more for older children and teens (the RAPR is 14+), however lighter people should have no trouble using it. If I may offer my opinion, I think it would seem a little odd for a larger adult, or even a normal-sized adult, to ride this scooter. It would be able to hold them, but it would appear too little for them.

While many people have little trouble tracking down upgraded scooters, teens and youngsters who have seen an early growth spurt may find themselves in a bind. When it comes to electric scooters for adolescents, the Razor E Prime is without a doubt the greatest option available anywhere in the globe.

I’d add a disclaimer and say that if the recipient is a teen aged 17 or older, you’d be better off getting them an adult scooter as they’ll probably be ready for it in the next year or so, while the Razor E Prime is a good choice for a while but may be outgrown in that time. However, the Razor E Prime is the best option if you’re shopping for a teenager between the ages of 14 and 16.