It’s a little perplexing to us how this scooter could be so well-liked after putting a lot of kilometres on it and carefully evaluating all of its features. The power of name recognition brought on by the Segway brand is the only explanation that makes sense.

The Segway Ninebot ES2 has grown extremely popular among e-scooter commuters despite not being a top-of-the-line model.

This scooter has a great design, is made of high-quality materials, and is well-known in the industry. However, the device’s functions are inferior to those of the competition, particularly when the premium price tag associated with the Segway brand is taken into account.

However, this electric scooter does function reasonably well and has adequate, but not particularly impressive, speed and acceleration abilities.

After saying so, let’s examine some of the Segway Ninebot ES2’s essential characteristics and parts. Speed is probably going to be a major deciding factor if you’re looking for a high-quality electric scooter for daily commuting. After all, you need to be certain that you can arrive at your destination on time.

The Segway Ninebot ES2 only managed a top speed of roughly 15 miles per hour during our performance tests, which is slower than many other comparable Segway models like the more recent Ninebot ES4 or the long-range Ninebot MAX.

On this scooter, the acceleration is just as dismal, if not more so, as the top speed.

From 0 to 16 mph, the Segway Ninebot ES2 accelerates in around 7.1 seconds. Even some of the most reasonably priced ones on the market move far more slowly than this.

Although the motor produces a respectable 300 watts, it is evident that it cannot produce much in the way of speed or acceleration. On the other hand, the motor is essentially silent, which is a benefit for anyone who wants their next scooter ride to be as quiet as possible.

The ES2 needs to be kicked started, like many electric scooters that are attempting to optimise range. Acceleration was incredibly slow, even though we would expect a 300-watt electric engine on a 13 kilogramme electric scooter to be pretty quick.

Positively, the motor is incredibly quiet.

The Ninebot ES2 electric scooter performs terribly while attempting to ascend slopes. It will be totally insufficient in a city with even a small number of hills.

The ES2 is the slowest scooter we’ve tested, in fact. Our 60 m, 10 percent gradient hill climb test with a 74 kg rider took 36.9 seconds to complete.

The less priced M365 accomplished this test in 20.8 seconds as a comparison.

Our in-the-field range testing reveal a 15.8-kilometer range for the Segway Ninebot ES2. With the same 74 kilogramme rider, we test every scooter on the same urban test loop. The loop contains hills and several stops and starts. The fastest (least energy-efficient) method of riding the scooter is utilised as rapidly as feasible.

Given that the ES2 only has an 187 watt-hour battery, this relatively limited range is not unexpected. In our real-world range test, the M365, its closest rival, achieved 23.5 kilometres with a 280 watt-hour battery.

This is shorter than the 26-kilometer range that Segway claimed to have under ideal circumstances. 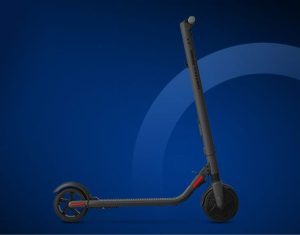 The Ninebot ES2 has a rear foot brake in addition to a front regenerative brake. Both of these brakes are not very powerful.

You must also utilise the rear foot brake to stop more rapidly, which calls for you to put most of your weight on one leg. This is not a rapid action in an emergency.

The ES2 stopped from a speed of 24 km/h during our testing utilising both the electronic and rear foot brake in 5.3 metres. The scooter needed more than 11 metres to stop using only the electrical brake.

Due to its extremely hard solid tyres (airless) and subpar integrated suspension, the Segway ES2 has a poor ride quality. Sadly, this makes for a pretty bumpy ride. It actually performs worse than scooters without suspension and pneumatic tyres.

When you first hop on the suspension, it feels soft, but every time you cross a bump or significant break in the road, you will hear a loud pounding sound. On bumpy roads, it continues to rattle. Having a scooter that sounds so rickety and is loud enough for everyone to hear you is a little awkward.

The scooter is agile and comfortable to ride on smooth roads despite having subpar suspension.

Although the ES2 is a pretty portable scooter, it has a stem that is enormous and 5-centimeters longer and wider than those on other scooters of a similar size. The ES2 is 112 centimeters by 43 centimeters by 30 centimeters when folded. The handlebars cannot be folded, only the stem.

The scooter is tougher and stronger because to the big stem diameter that holds the battery, but it is also heavier than previous scooters and harder to transport. When folded, the large-diameter stem cannot be completely encircled by the hand of the normal adult, making the scooter heavier.

The balance point is easy to locate but not ergonomic because it sits directly on top of a raised section (the charging port) of the already-large stem, making things worse.

The stem is also a little over 5 centimeters longer than on comparable scooters. Even though it might not seem like much, this scooter barely fit into the trunk of a mid-sized automobile while every other scooter did without a hitch. To fit it in at an angle, we had to reorganize the other objects in the trunk.

The handlebars and stem definitely seem really sturdy and rigid. There isn’t any stem sway. Although we haven’t seen any reports about it, we don’t like the way the stem locking mechanism is designed because it seems prone to accidentally collapsing. The handlebar and cockpit areas are well-designed, attractive, and finished with high-quality materials.

A vivid LCD panel serves as the cockpit’s focal point. In full sunshine, you can see the speed and battery life. The power mode icon, which transforms from white to red, is challenging to notice, though.

The accelerator has a solid mechanical action and a pleasant feel. Despite the weak power, we almost always pushed it to the limit despite the fact that it is sensitive to slight changes. There isn’t much of a difference between pushing it all the way and not pushing it at all with the brake control, which is comparable but less sensitive.

The front and rear wheels on the Segway ES2 are solid (airless) and measure 20.3 cm in diameter. They are not flexible like other airless tyres since they are built of a relatively rigid material. This indicates that they offer very little suspension and have subpar grip.

When a tyre wears out, it can be replaced, but replacing the front tyre requires completely disassembling the front-wheel motor, which can be a difficult process.

The advantage of airless tyres is that flats are not a concern. These particular ones, though, are below ordinary.

Similar to the Xiaomi, the platform’s flat area measures approximately 40.6 centimetres. The front platform is then gradually raised; the first few inches are useful. This excellent design element contributes to expanding deck area without expanding the scooter’s overall size.

The ES2 has a red taillight and a high-mounted LED headlamp. Additionally, there are LED strips underneath the deck that offer “swag lights” or “ground effects.” When the scooter is turned on, quickly tapping the power button makes controlling the lights simple.

On either side of the scooter’s back deck are installed taillights. When you are immediately behind the scooter, it is more difficult to notice it because of how they are positioned at an angle. But from the sides, visibility is good.

The 16 colorful LEDs on the scooter’s bottom provide one of the best ground effects (ground lighting) features. Our favorite setting for the lights is the “breathing” mode, in which they alternate between several color and frequency settings. At best, the packaging lacked imagination, with the insulation being made of clumsily cut and bent cardboard. These worked, and the scooter was restored to excellent condition. There were assembly instructions and information on all riding safety measures in the many various languages that were supplied in the manuals.

The ES2’s construction quality is respectable; it is on level with or better than that of other well-known name-brand scooters in this price bracket. None of the parts are particularly substantial like those on a more expensive, higher-quality scooter, but they aren’t completely worthless either.

Is the Ninebot ES2 waterproof?

Although the Ninebot ES2 is water-resistant, it is not waterproof. According to its IP54 rating, it is capable of withstanding water spray from all angles but not submersion. The ES2 will be harmed by prolonged exposure to water, which is not covered by the Ninebot warranty.

The ES2 comes with a Segway guarantee, which is another advantage of this model that meets or surpasses the majority of industry standards.

A three-month guarantee is offered on replacement parts and cosmetic wear and tear. The battery is protected for six months, while the frame is covered for a full year.

This guarantee offer does provide some reassurance to anyone who may have concerns about the quality of this scooter.