The Kugoo M2 Pro electric scooter is an excellent entry-level scooter for commuters looking for a secure and pleasant ride from one pit stop to the next. This electric scooter is a great value for money that is also a lot of fun. It provides a decent balance of speed and range, as well as nifty features like app integration, multiple speed settings, and cruise control. If you need a trustworthy scooter that can go the distance, the M2 Pro is the scooter for you.

The Kugoo M2 Pro is a well-rounded budget scooter with a slew of appealing features that make it the obvious pick for commuters looking for a cool and efficient ride. With a 350-watt front motor, it can reach speeds of up to 15.5 mph and climb grades of up to 15 degrees. With a 36volt 7.5Ah lithium-ion battery, it can travel up to 18.6 miles on a single charge, making it ideal for long journeys around town, university, or even the park. You’ll be pleased to learn that this scooter has a strong pair of electronic and mechanical disc brakes, smoother-than-average dual suspension, and a sturdy, durable frame for an entry-level scooter at such a low price. It’s also lightweight, which is a big plus for commuters who have to pick up and carry their electric scooters for long distances. The Kugoo M2 Pro is unquestionably good value for money, and it can easily compete with other scooters that provide comparable features but are far more costly. If you’re looking for a way to combine enjoyment with convenience. 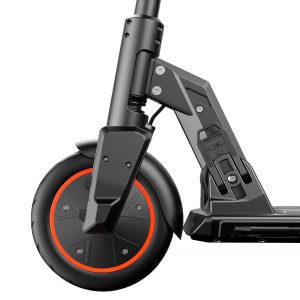 The Kugoo M2 Pro is a dependable form of transportation that has all of the desired characteristics in one economical package. It’s an uncommon design to include a 350 Watt brushless motor in the front wheel. It’s smart, though, since it puts the power on the front wheel, which allows for a stronger forward pull and momentum, allowing it to go even quicker and harder than most other electric scooters in this price range. While this is a commuter scooter by definition, the suspension system, along with the 8.5-inch tyres, provides an incredibly smooth ride, even on less-than-ideal city streets. Riding this e-scooter is not only possible but also enjoyable thanks to three speed levels and cruise control. Electric brakes also make stopping simple and safe, which is important while riding in congested locations. With this slammin’ commuter scooter, you’re getting more than you probably expected in terms of performance.

The Kugoo M2 Pro has a top speed of 15.5 MPH and is the perfect e-scooter for those who enjoy speed in moderation.

The Kugoo M2 Pro has a peak speed of 25 kilometres per hour (15 mph). Although there are few reports from people who have tested this speed, those who have do so support this claim, with some even reporting greater peak speeds of about 28 kmh (17 mph). As the battery level lowers, the peak speed will decrease.

Despite the fact that the Kugoo M2 Pro is primarily a commuting scooter, it nevertheless manages to perform well uphill. Because the M2 Pro is a front-wheel drive scooter, it has more forward-pull and momentum, allowing it to climb inclines as steep as 15 degrees.

The Kugoo M2 Pro includes a 36V, 7.5.4 Ah lithium-ion battery that is efficient and long-lasting, with a quick charge time of only 4 hours. It should be noted, however, that when the battery’s life cycle is decreased over time, the battery charge time may climb to 6 hours – which is still not awful. When it comes to range, the lithium-ion battery’s efficiency allows this scooter to travel up to 18.6 miles.

A single 350W BLDC motor provides the power needed for this electric scooter to reach speeds of up to 15.5 MPH, not to mention the capacity to comfortably navigate flat and hilly terrain. Because BLDC motors are often reserved for higher-priced electric scooters due to their quality and endurance, the M2’s inclusion is a nice surprise.

The Kugoo M2 Pro is a sturdy and long-lasting device. The fact that the Kugoo M2 Pro is made of both aluminium alloy and magnesium alloy distinguishes it from its competitors. Both materials are extremely robust and light, but Kugoo takes it a step further by including magnesium alloy, which is said to be even harder than aluminium alloy and has more impact resistance. In addition, Kugoo deliberately included additional great features on the Kugoo M2 Pro, including as broad handlebars with superb grip and a stem height that is suitable for most riders.

The Kugoo M2 Pro’s suspension is another of its standout qualities, since you wouldn’t expect such excellent suspension on an electric scooter at this budget. This e-scooter includes a double suspension in the back and a spring suspension in the front, giving it more cushioning for a smooth ride.

In terms of ride quality and simplicity of use, the Kugoo M2 Pro is a commuter’s dream. The M2 offers all of the features you’d expect from a high-end electric scooter, but for a fraction of the cost. It boasts a well-built frame and stem that won’t buckle easily, smooth suspension, and powerful acceleration, speed, and torque, as well as cruise control as an extra plus.

The M2 Pro’s lighting is well-designed and quite practical. For enhanced forward vision, a powerful front light illuminates the road ahead of you. When the brakes are used, the rear brake lights are visible. However, as usual, we recommend wearing luminous clothing to make yourself more visible at night when visibility is decreased.

Kugoo knows their business when it comes to brakes, and the M2’s dual braking system ensures that the brakes are as safe as they can be. With an electronic brake in the front and a mechanical disc brake in the back, this scooter boasts excellent stopping power. Aside from that, the Kugoo M2 Pro incorporates an emergency rear foot brake, providing you extra peace of mind that you’ll be able to stop safely in an emergency.

At its quick release lever that opens with the stroke of a button, the Kugoo M2 Pro is incredibly simple to fold, allowing you to unfold and fold this e-scooter with less effort. At 34.4 pounds, the M2 Pro is extremely easy to travel, and the handlebars pivot, making this scooter even more compact for transporting in the trunk of your vehicle, for example. However, because of the position of the front motor, it is a little front-heavy, thus fixing the M2 Pro’s balance may take some time. 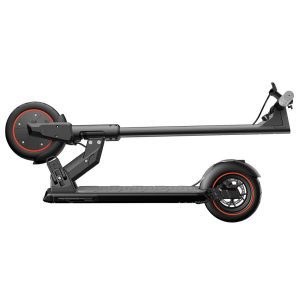 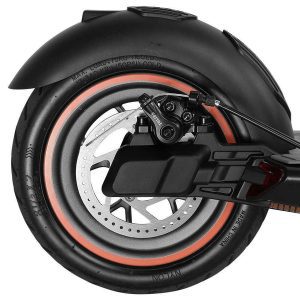 Kugoo has nailed this function on the most (if not all) of their scooters, and the Kugoo M2 Pro is no exception. The M2’s deck is ultra-comfortable, not to mention safe, thanks to its rubberized, non-slip deck and angled lines that contribute to the beauty of this e-scooter.

The Kugoo M2 Pro’s controls and display have been thoughtfully designed to provide maximum functionality. The LED display screen is bright and clear enough to see important information like your current speed, gear selection, and remaining battery life. It also has the power button, which turns on the front LED light when the scooter is turned on. The thumb throttle is located on the right side of the handlebar for easy access. The throttle is a two-in-one device that not only increases the speed of this e-scooter but also initiates cruise control. The Kugoo M2 Pro is also app-friendly with numerous options, so if you want to play with with things like acceleration and cruise control, as well as remotely locking your scooter, you can do so using the Kugoo app. You may have some Bluetooth connectivity troubles; however, this is a typical problem that most electric scooters have, and something Kugoo will hopefully address shortly.

The scooter’s design decisions have resulted in increased torque, motor output, and acceleration, primarily by placing the motor in the front wheel. This is a nice thing, and it is the choice chosen by the majority of single-motor scooters.

The normal disadvantage is that control and steering may be lacking, and the scooter may be a little front-heavy.

The Kugoo M2 Pro solves part of this with a wider handlebar, which is beneficial. However, the scooter may still be front-heavy, so while stopping from a rapid ride, make careful to move your body’s centre of gravity back a little. 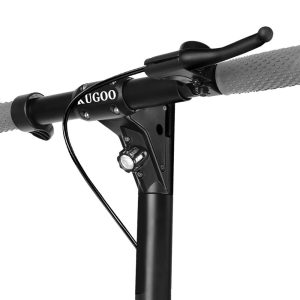 Most electric scooters have an IP54 water resistant rating, which this scooter does. As a result, don’t be concerned if your Kugoo M2 Pro gets a few splashes or gets wet in the rain; it will survive.

Although the app has a good appearance and should have valuable functions, it is poorly executed, and users are often dissatisfied. This appears to be a prevalent theme across many popular electric scooter businesses, which strikes me as odd — isn’t making a nice scooter the more difficult aspect, which Kugoo has already accomplished?

To be honest, a terrible app shouldn’t be considered a disadvantage unless it prohibits the scooter from being used, as most scooters don’t come with one. At the very least, Kugoo is putting in an attempt.

Anyway, the app has the ability to lock the scooter, which is a fantastic function that I usually like in apps. I still recommend investing in a proper scooter lock, as the app lock will not prevent theft, but it’s better to have one than not.

It can also turn on and off the scooter and control the lights.

It is capable of displaying:

It may be premature to speculate on the scooter’s estimated lifespan because it has only been on the market for a short time. One thing is certain: this model is a significant upgrade over earlier models in the series, and the ruggedness and dependability are on a whole new level. In comparison to other starter scooters, the amount of “chumminess” is substantially decreased, and higher quality parts are utilized overall.

The Kugoo M2 Pro has a 12-month guarantee on the whole device, with the exception of the battery, which has a 6-month warranty. There is also a 14-day money-back guarantee if there is something substantially wrong with the scooter when you receive it.

The Kugoo M2 Pro is a simple and easy-to-maintain scooter with no issues. Simply remember to properly store it after each usage, inspect the tyres for flats on a regular basis, and double-check that your scooter is properly constructed when you initially set it up. The user handbook includes all of the instructions you’ll need to properly maintain your electric scooter.

Kugoo M2 Pro: Is it worth the money and is it worth buying?

The Kugoo M2 Pro is a budget-friendly scooter with more features than you’d think for an entry-level scooter, costing $399 or £357. In conclusion, if you’re a commuter seeking for a dependable and efficient scooter for frequent commuter travel, this electric scooter is definitely worth the money.

Manage Cookie Consent
To provide the best experiences, we use technologies like cookies to store and/or access device information. Consenting to these technologies will allow us to process data such as browsing behavior or unique IDs on this site. Not consenting or withdrawing consent, may adversely affect certain features and functions.
Manage options Manage services Manage vendors Read more about these purposes
View preferences
{title} {title} {title}