The Hover-1 Alpha scooter has ‘beginner’ written all over it at its current pricing. Although it has excellent tyres, it lacks a suspension system. Even though it performs an excellent job of dampening bumps, this indicates that it is not designed for difficult roads.

When hunting for the pack’s top dog – the alpha male – it’s critical to pick the best of the bunch. The Hover-1 Alpha electric scooter is unquestionably the best of the bunch. This electric Scooter is no joke, with a massive peak 450W motor power capable of speeds up to 18mph and a range of 12 miles. Not to mention that it has a collapsible frame for simple transport and storage when not in use. It comes with an extra-wide footpad for additional comfort and stability, as well as two 10″ air-filled tyres for optimum riding suspension. When it comes to the future of mobility, this is as good as it gets.

Today, we’re going to take a look at Hover-1’s Hover-1 Alpha electric scooter. It’s a low-cost alternative, but it’s top-of-the-line in terms of power and speed. A Bluetooth speaker, as well as a gorgeous appearance of undercarriage light and LED light on the deck, are some of the other elements that captured our hearts. 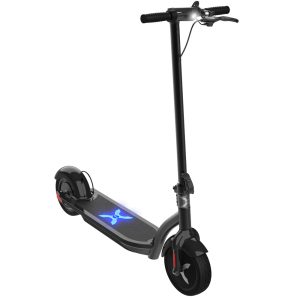 The Hover-1 Alpha scooter has ‘beginner’ written all over it at its current pricing. Although it has excellent tyres, it lacks a suspension system. Even though it performs an excellent job of dampening bumps, this indicates that it is not designed for difficult roads.

If you’re looking for a comfortable and affordable scooter to get you from point A to point B, this is a good option. Keep in mind that this is a large scooter to transport.

The peak speed of the Hover-1 Alpha is the first of several shocks. Its highest speed, according to the manufacturer, is 18 mph (the onboard speedometer won’t go much faster). Despite this, some user testing indicate that it is a few miles faster.

It has a 450W brushless motor, which gives it an edge. At this pricing point, it has more power than any other scooter on the market.

Acceleration is beneficial, but it is not “soul-chillingly” beneficial. You can’t expect that from a cheap scooter that can only go 0 to 15 miles per hour.

The Hover-1 Alpha’s battery will give you between 9 and 12 miles of range.

Switching from Sport to Standard Mode may slow it down even more, but it will increase your range by a few miles. At peak speeds of 12 mph, though, it will be a slow journey.

The battery will take 4–6 hours to charge from dead to full, which is plenty even for a regular commuter.

Electric Kick Scooter Hover-1 Alpha With a 450W brushless motor and lots of power, you’ll be able to be up and running in no time.

The strong and sturdy frames of Hover-1 electric scooters, which can support riders weighing up to 280 lbs., and high-quality construction are their distinguishing features (Hover-1 Engine). The Hover-1 Alpha fits this description; it has a lovely design with soft edges and a wide standing deck covered in anti-slip material. I especially loved the lovely light blue Hover-1 logo in the standing deck’s middle. It boasts a sturdy steering bar and top-notch rubber grips with ergonomic shapes for optimum ergonomics and control. An LCD display that displays the speed, riding mode, and battery level is located in the middle of the steering bar.

Despite its flaws, the Hover-1 Alpha electric scooter is exceptionally well constructed. It has a large build and feels robust from the handlebars to the rear fender.

The deck feels solid and stable, and the stem is thick and wobble-free. It nearly feels like it could carry more than the 264 pounds it’s rated for.

The top half of the deck is covered in grip tape, which provides traction whether your shoes are damp or muddy.

The folding process is straightforward and safe. However, if you have tiny hands, the hefty stem may require two hands to raise.

The kit includes working front and back lights, but the LED-lit X emblem on the deck will be significantly more obvious.

At this pricing point, it boasts some of the greatest wheels you’ll find. It’s also worth mentioning that the fenders perform an excellent job. 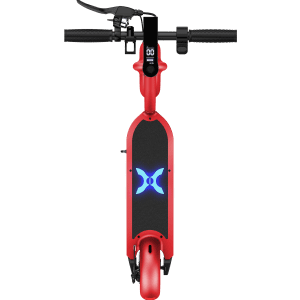 On asphalt, pavement, and other flat surfaces, the Hover-1 Alpha is quite pleasant to ride. The huge pneumatic wheels are really useful.

The scooter rides more steadily since they’re broader. You won’t feel most bumps because to the air cushion (at the very least, they won’t kill your wrists and ankles).

Because the tyres adhere to the road surface to create a more stable grip, these wheels enable superior control at high speeds.

The wobble-free stem keeps it spinning quickly, allowing you to manoeuvre in and out of crowds with reasonable ease.

Though the manufacturer may have cut corners on some essentials, the ride quality is nearly worth it at this price.

The Hover-1 Alpha has only one brake, and it isn’t particularly effective.

A lever on the left handlebar controls the rear disc brake. Even after modifying it, it still feels overly feeble, which is an issue given how quick this bike is.

Many users have resorted to drag their feet down the ground in a last-ditch effort to halt in time. To put it another way, this isn’t a scooter that will come to a complete stop on a dime.

The folding mechanism lowers the stem to the deck, where it may then be hooked up to the back fender. It’s a clever idea, especially given the scooter’s height is likely to be your primary worry.

When folded, the length and weight (36.2 pounds) stay the same, so it’s still on the large side. As a result, it’s reasonable to assume it’s not very portable. 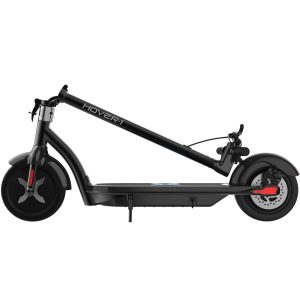 The wheels of the Hover-1 Alpha are superb. They’re air-filled 10-inch tyres that do an excellent job of dampening bumps.

They’re so fantastic that if you never travel off-road, you’ll scarcely notice the lack of a suspension system.

Pneumatic tyres are more likely to have flats, but they’re always the best option. They just increase the quality of the ride.

The brake lever is on the left side of the cockpit, while the thumb throttle is on the right.

The center-mounted display indicates the scooter’s battery life, riding mode, and speed, however with considerable inaccuracies.

The thumb throttle is a nightmare, as difficult as it is to envision.

Its location requires you to flex your hand continually in order to apply pressure with your thumb, resulting in hand cramps every few minutes.

Aside from that, it’s a very typical cockpit. 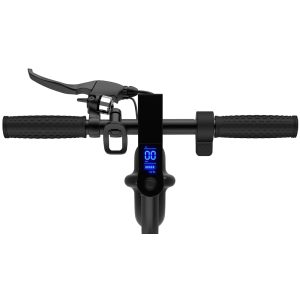 Riders can see Battery Percentage, Headlights Indicator, Speedometer, and much more on the LCD Display.

Unfortunately, the Hover-1 Alpha scooter does not have an IP rating. When riding in rainy circumstances, it is quite susceptible due to its lack of water protection.

As a result, you ought to steer clear of cycling if it’s raining or across puddles.

With rear flashing red brake lights, a sport mode for high speeds and quick acceleration to get out of tight situations, and a lower speed control mode option for inexperienced riders, Hover 1 is serious about the safety of its electric ride able product. Want to stop monitoring your speed? When you are travelling at the chosen speed, the cruise control option is also available. During testing, I hardly ever engaged the cruise control and mostly left it on the Sport setting since I liked the way the scooter handled at higher speeds.