The Hiboy Titan Pro is built to take your city commute to new heights. It’s an evolution of the original electric scooter, designed for individuals who want a little more from their scooter, for those who require a little additional speed when zipping through the city streets or want to look nice on their way to work. The scooter is ergonomically designed with a large texturized deck and rubberized handle grips for added comfort. In the mid-level segment, the sporty and sleek scooter is a welcome change of pace. This tough electric scooter has high-quality materials and can easily handle riders weighing up to 286 pounds (130 kilogrammes), making it a fantastic choice for riders of all sizes.

The Titan PRO from HiBoy seems like a strong and quick electric scooter thanks to its big tyres and hefty deck. On the other hand, the brake cable is a stout cable that is climbing up the stem, which is unusually slender. The hefty black electric scooter’s overall appearance is pleasing, with only a few red accents on the tyres.

Although we’ve already said that you may use this scooter for commuting, you need still think about its weight: If you have to raise, fold, or carry the gadget often during the day, 62 pounds can be too heavy.

This electric scooter can carry a maximum load of 286 lbs, which is more than adequate for an ordinary rider carrying bags or cargo with them. The increased weight gives stability throughout the ride as well as solidity. 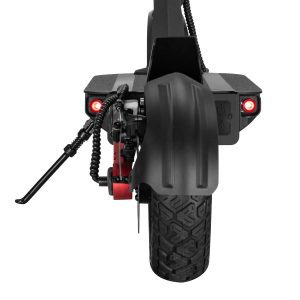 A twin 1200w brushless motor powers the HiBoy Titan Pro. It consists of two units, and you can choose whether to use one or both of them by pressing the button on the left side of your handlebar. The electric scooter can go up to 30 mph when both are engaged, which is far quicker than the maximum speed permitted for electric scooters on city streets.

Disengaging the second motor is one method, and using the speed modes is another, for limiting the maximum speed. You may customise the performance of the scooter to meet your demands by choosing from three different speed levels. Lengthening the distance may also be accomplished by slowing down.

The ride is exceptionally pleasant on any surface because to the big tyres and the twin suspensions. The scooter can easily climb hills without suffering the speed reduction that other electric scooters do because of the strength of its two motors.

The HiBoy Titan Pro is powered by a 48 V, 17.5 AH, 18650 li-ion battery. Despite the fact that there are many variables that might affect this number, it offers a 40-mile range (your weight, your riding style, the speed, the type of terrain).

However, there are techniques to increase the distance as much as possible, such as attempting to ride more gently or, more simply, slowing down (set up a low-speed mode or disengage one of the two motors).

The charging time is this electric scooter’s main drawback. From empty, a full charge takes nine hours. It nearly always has to be charged overnight, and if the battery is low, you can’t simply put it in for an hour and be good to go.

The handlebar of the HiBoy Titan is curved, and it includes handgrips made of rubber and brake levers on each side. You have everything you need to operate each part of your electric scooter on the handlebar, but there are a lot of buttons and levers since it is so strong and packed with functions. So let’s go forward in sequence.

both parties
You have a brake lever on either side, immediately before your handgrips, as we’ve already described. You may use them in the same way you would your bike’s front and rear brakes.

Right Side
There are a few controls and the key ignition on the left side. Yes, the HiBoy Titan has a key ignition, exactly like a vehicle. The makers reasoned that having a physical mechanism through which you, and only you, can start and propel your electric scooter could be more secure. When you approach near to your electric scooter, it identifies you and may be switched on. This occurs using the Bluetooth connection with your smartphone on the majority of electric scooters. This system has certain issues since not all Bluetooth connections are reliable and because hackers may access it at any time.

Speaking of the buttons, they are fairly basic: the Eco mode buttons turn on the Eco mode, which reduces speed and enables you to save battery power; the Power button turns on or off the second motor; the HiBoy has two motors, and you can choose whether to use one or both of them.

Correct Side
The throttle and the display are located on the right side. By pressing the throttle down, you may use your thumb to control it.

The display is an LCD screen that lets you to choose the speed mode and gives all the relevant information about your riding. Even in bright sunshine, it is substantial and clearly apparent.

Mechanical disc brakes are included on the front and rear wheels of the HiBoy Titan. They have strong stopping force, yet they are also simple to softly control. You often find yourself gradually slowing down rather than suddenly stopping while using an electric scooter.

To avoid accidentally putting the electric scooter on the ground whenever you use the brakes, you want to have very sensitive brakes. For increased safety, these brakes are capable of reacting to pulling force.

Large 10-inch tyres are included with the HiBoy Titan. Additionally, they include an anti-skid pattern that makes you feel safer and more comfortable off-road and on slick surfaces.

When riding on level ground, off-road tyres produce noise and are overly bouncy, which is an issue. The makers of Hiboy, however, have developed a solution that offers comfort, security, and stability without impairing the riding experience on flat terrains thanks to its anti-skid material. 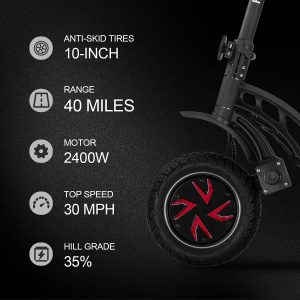 Lights that work perfectly are included with the HiBoy Titan Pro. They serve merely to keep you safe while you ride, not to enhance the appeal of the electric scooter. A strong white headlight up front will assist you see where you’re going and is still functional in low light.

Additionally, keeping it on is crucial since it makes you visible to other drivers. There are a few brake lights on the back that function the same way as the ones on cars—they come on when you use the brakes.

The deck of the HiBoy Titan Pro is broad and thick. Two extremely powerful and effective anti-slip strips are included. It also comes with a retractable kickstand, much like any other electric scooter, which is incredibly useful for keeping the gadget upright. You may utilise it in the same manner as any other mode of transportation in this fashion.

The HiBoy Titan Pro arrives already constructed, with the exception of the handlebar, much like the majority of electric scooters on the market today. However, the handlebar just has to be installed, which entails plugging in a few wires and fastening it to the top of the stem. The whole process takes less than ten minutes, and the package contains all the equipment you’ll need.

Both the front and rear tyres make up the HiBoy Titan Pro’s suspension system. It works wonders to level out the bumps, improve the ride’s pleasure, and increase balance and safety on any surface.

Why we like about HiBoy Titan Pro Electric Scooter

This is a great option if you’re looking for a high-quality, robust, and quick electric scooter. It has everything you need to take it anywhere, ride on any surface, and have some fun off-road. While you need to leave it, for instance, outside a shop when conducting your quick errands, the key ignitor gives you more peace of mind. In other words, an electric scooter is a complete replacement for the vehicle you were previously using. You’ll have a more environmentally friendly mode of transportation, and because an electric scooter doesn’t need gasoline, you’ll also be saving a tonne of money over the course of many years.

The huge tyre, the anti-skid texture, and the suspensions are all features that the makers carefully considered to provide this electric scooter the most pleasant riding experience possible. Your balance on the electric scooter and safety are both improved by increased comfort.

The tyres have previously been brought up, but they need more debate. The texture, in particular, has the best detail. Electric scooters often have on-road or off-road tyres that can only be used on surfaces that are suited for those surfaces, never for both. Instead, they achieved a great compromise with these tyres, making you both comfortable and safe on and off the road.